"Follow your heart but take your brain with you." ~Anonymous
In the field of exercise science there is a concept known as The Exercise Paradox and it suggests that if you survive enough repeated bouts of exercise you'll likely outlive those who never exercise. While that sounds dramatic, the facts are that as exercise intensity increases so does the risk of bad things happening. And almost all of those things involve the heart. But the flip side is the adoption of exercise a lifestyle behavior significantly reduces the risk of hypokinetic early mortality-related diseases like heart disease, diabetes, obesity, and certain site specific cancers. Recent evidence suggests that masters endurance athletes with a long history of training may be at increased risk of heart-related rhythm abnormalities including one called supraventricular tachycardia. And as luck would have it, I recently discovered I too have experienced it.
In a previous career I spent nearly 25 years as a clinical exercise physiologist and had the good fortune to supervise over a million person-hours of ECG-monitored exercise. It's fair to say this particular topic is in my wheelhouse. I also was witness to countless episodes of this phenomena in the patients I supervised.

Heart Rate Monitoring
Many endurance athletes collect heart rate data during training. The consumer version of the technology has become quite advanced, accurate, and much more commonplace in the last 20 years. The most popular versions include wireless chest strap and wrist-based monitors. Although my personal bias is toward the chest-strap technology, recent comparative reviews have shown that both technologies are reasonably well correlated if the manufacturers instructions are followed. For nearly all of us who add the technology and data to our training plans, the motivation is to add important detail with respect to cumulative training stress across all modalities. But the benefits should also include the possibility of uncovering one of the more common and perhaps most elusive heart rhythm disturbances in endurance athletes; supraventricular tachycardia.

Supraventricular Tachycardia (SVT): What You Need To Know 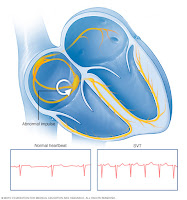 Supraventricular tachycardia occurs when faulty electrical connections in the upper chambers of the heart (ie. atria, "supraventricular", or above the ventricles) trigger and sustain an abnormal rhythm. When this happens, the heart rate accelerates (ie. tachycardia) too quickly and doesn't allow enough time for the heart to fill before it contracts again potentially impacting it's performance.(1)
This heart rhythm abnormality is one of the more common found in endurance athletes and is generally categorized as a "tachyarrhythmia" (ie. fast abnormal heart rate).  It often manifests itself as a sudden unpredictable accelerated heart rate (150-200 beats/minutes) that is inconsistent with the amount of exercise performed, is sustained for a number of minutes, and often resolves spontaneously.  Endurance athletes are largely desensitized to the feeling of high heart rates, so it may go unnoticed (ie. without symptoms).  However, some individuals are symptomatic while it is happening describing symptoms such as a fluttering in the chest, abnormal shortness of breath, dizziness, or unusual exercise-associated anxiety.  These symptoms and this abnormal rhythm may last for minutes or days and should result in a visit to your healthcare provider.  If you experience these symptoms associated with a sudden onset of accelerated heart rate inconsistent with the amount of activity performed you may be able to "break" the arrhythmia by using the valsalva maneuver.  Sit down and expire forcefully against a closed glottis for a few seconds.  This "bearing down" can momentarily alter the electrical pathways in the heart and resolve the arrhythmia.

Practical Application: How It's Uncovered
If the abnormal heart rhythm goes unnoticed it may not be until the post-activity review of the training data that the unusual accelerated heart rate is discovered. If endurance athletes notice this unusual accelerated heart rate the first thing that must be ruled out is a malfunction in the heart rate monitor itself. While home-based heart rate monitoring technology is robust, it is not without error. Generally speaking, if you notice sudden brief "spikes" in heart rate lasting only a few seconds it can be assumed that it is an equipment error. However, if these accelerated heart rates are sustained for minutes within a training session with an otherwise normally functioning device, then there should be suspicion that an actual arrhythmia has occurred.

My Recent Experience With SVT


As "luck" would have it, this is exactly what happened to me during a recent fat bike ride. At nearly 50 years of age I have had the good health and fortune to have trained as an endurance athlete consistently for the past 30+ years. And working in the field of cardiology as a clinical exercise physiologist during much of that time, I have had a number of advanced diagnostic procedures performed including a 12-lead ECG, echocardiogram, and maximum graded exercise test. All had been interpreted as within normal limits. So although I understand the cardiovascular pathophysiology of long-term exposure to high volumes of endurance exercise, I was nonetheless taken off guard when I reviewed the heart rate response from a recent ride. Nearly halfway through a typical fat bike ride with better than average conditions following a fairly strenuous but not unusual climb (for me), I noticed my heart rate failed to drop on the easy downhill coast. You can see from the shaded area in Diagram 1 that not only did my heart rate fail to drop when I started back downhill, it actually accelerated above my average climbing heart rate (150 b/min vs. 180 b/min). Because my heart rate display was hidden under the sleeve of my jacket I was completely unaware during the activity that anything was out of the ordinary. The abnormally elevated heart rate spontaneously resolved after approximately 10 minutes. While there is absolutely no way to tell exactly what this abnormal heart rate was, the sudden onset, the rate, and spontaneous resolution are all highly suggestive of supraventricular tachycardia.


This frank episode had me wondering if it had happened before so I took a little closer look at some recent training data and low and behold I found another asymptomatic occurrence. This time on my hard tail single-speed bike and on pavement. And luckily I had another exact ride (route and equipment) for comparison. Diagram 2 is a comparative study of two exact rides on different days but on the same bike. The above heart rate data shows my "normal" heart rate response to this level of challenge. My heart rate increases during the climb and then decreases during the descent. This is very typical in cycling. However, the bottom heart rate data shows a failure of my heart rate to drop following the second ascent and subsequent descent. Although a little slower than my "episode" on the fat bike, this shaded area represents an average heart rate in the 160's and is consistent with SVT and because it occurred during a descent makes it suspicious.

Take Home Message
It's important to note that the diagnosis of SVT cannot be made by analyzing heart rate data solely although it is often the first indication the arrhythmia has occurred. You should become suspicious if when analyzing your heart rate data in the post-activity period you notice a sudden increase in heart rate (150-200 beats/min) that is inconsistent with the effort performed. If accompanied by the symptoms previously described and if it's a new phenomena to you, it's wise to contact your healthcare provider for follow-up. This follow-up will almost certainly include a physical exam and should include a 12-lead ECG. The paroxysmal nature of this arrhythmia makes it very difficult to document with electrocardiography. Many endurance athletes report having to wear an "event recorder" for multiple days including during exercise but without "uncovering" the arrhythmia. This often leads physicians to "speculate" what is actually happening. If however the arrhythmia is documented with an ECG and it has become performance-limiting, cardiologists may decide to either ablate (ie. destroy) the small cluster of cells in the atria causing the problem or slow the electrical conduction of the heart with a medication in the class known as beta blockers.

While this abnormal heart rhythm does not necessarily portend serious medical consequences in otherwise healthy hearts, it is worth noting and should always be followed up with a visit to your healthcare provider to rule out occult causes or other more serious tachyarrhythmias like ventricular tachycardia if you are symptomatic.

This blog is intended for informational purposes only and represents general training and racing information. For more detailed information on my professional coaching services please visit the website at www.ascendendurancecoaching.com. Background photo courtesy of Joe Viger Photography. 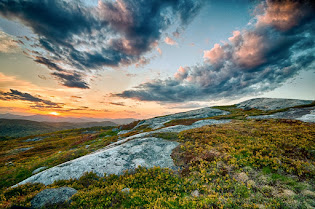